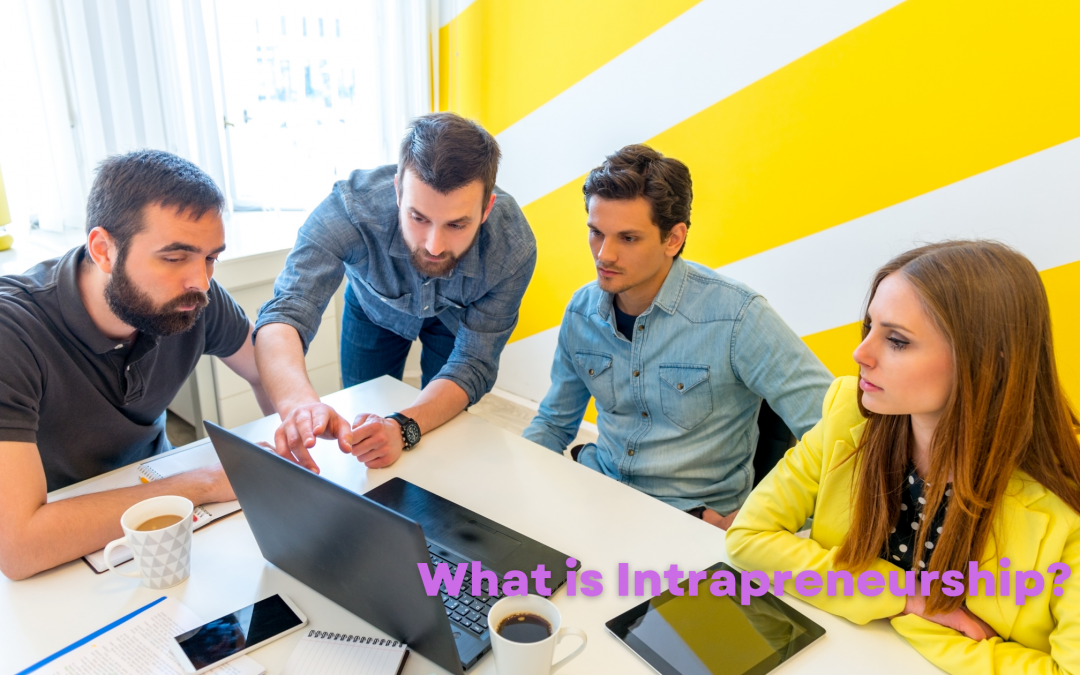 Today I wanted to talk about Intrepreneurship as there is a lot of misunderstanding around what it is and what it offers an organisation…so here we go.

Intrapreneurship is thinking and acting like an entrepreneur within an established company or organisation. It’s creating a new business or venture within an organisation. Sometimes that business becomes a new section, or department, or even a subsidiary spinoff.

Chances are there’s a handy example of intrapreneurship stuck to your desk, the much overlooked post-it note.

Also it’s likely you use Gmail, which grew out of Google’s “20% time,” while the Facebook “like” button was built during one of the company’s hackathons. And some of the US military’s most well-known aircraft [the SR-71 Blackbird, and the F-22 Raptor] were engineered at Lockheed Martin’s Skunk Works.

So, entrepreneurs can and do exist in corporations, and corporations need them more than ever.

Unlike entrepreneurs, intrapreneurs work with an existing company’s resources, they’re not building something entirely from scratch, nor are they risking their own money. They’re creating something that hasn’t been done before or done quite the same way, you need to think about how big the market is, how many resources do they need to create something, and what could the payoff be.

Many of the same criteria that we would use to evaluate a new start up is really the same.

Why you and your organisation should care

Kodak is the perfect example. It was founded in late 1880s, became a giant in the photography industry in the 1970s and filed for bankruptcy in 2012. For almost a hundred years, Kodak was at the forefront of photography with dozens of innovations and inventions, making this art accessible to the consumer. How it worked: people would take photos with the Kodak camera and then send the camera to the Kodak factory where the camera’s film was developed, and photos were printed.

The company’s core product was the film and printing photos, not the camera. Kodak’s Kodachrome was the company’s leading sales item.

It was discontinued in 2006 after 74 years of production.

The right lessons from Kodak are subtle. Companies often see the disruptive forces affecting their industry. They frequently divert sufficient resources, money and people, to participate in emerging markets. Their failure is usually an inability to truly embrace the new business models the disruptive change opens up. Kodak created a digital camera, invested in the technology, and even understood that photos would be shared online. Where they failed was in realising that online photo sharing was the new business, not just a way to expand the printing business.

The organisation overflowed with complacency. It began in the late 1980s. Kodak was failing to keep up even before the digital revolution when Fuji started doing a better job with the old technology, the roll-film business. With the complacency so rock-solid, and no one at the top even devoting their priorities toward turning that problem into a huge urgency around a huge opportunity, of course they went nowhere.

Kodak’s lack of strategic creativity led it to misinterpret the very line of work and type of industry that it was operating in which was later devastated with a fundamental shift towards the digital age. Strategic problems were tackled through rigid means, and as mistakes in the manufacturing process were costly, and profitability was high, Kodak avoided risky decisions, and instead developed procedures and policies to maintain the quo.

Furthermore, it was not only a case of delayed action, as although it was clear the business needed to get on to the digital merry-go-round, Kodak’s executive staff were simply not prepared to take the necessary risks required.

The idea is that firms get caught up in doing what they’re doing, and even if something brand new comes up, if it’s outside their existing business model, they won’t necessarily do something about it.

Introducing intrapreneurship into your organisation

Understand that intrapreneurship isn’t for everybody. There are many industries that can’t be revolutionised by an internal startup. The aircraft industry can’t just get some venture capital and whip up a company that goes public and can be sold in the next five or 10 years. The same goes for a power company because of the price of power and having to work with an existing grid rather than creating a new one. That’s not to say it won’t change in the future.

Even if corporate entrepreneurship is the right choice to invest in at your organisation, remember that it is different from a traditional startup because the latter is based on a blank canvas.

When you’re in start-up mode you really don’t have to worry about anything else, there’s nothing there, When you’re in a larger company, there’s already a lot of paint on the canvas. There might even be a tear, and somebody else might claim to own the canvas.

That’s good and bad news. An existing business has products, revenue, employees, cash, organisational structure, and processes, these are all the things a startup is trying to obtain.

But the dilemma is once you get those things, it creates inertia in the system, the engine begins to turn, but that in itself creates a rigidity that makes it hard to be totally flexible.

An entrepreneur has nothing to lose because they have nothing.

However, when you’re in a big company you don’t have freedom because you do have a lot to lose. So, you have to balance things that you do with the fact that they could be threatening to your existing business.

What happens in most firms is that there is a resistance against a new method of work.

If you’re sitting there and you see a guy in the corner working on an automated system that will make your skills obsolete, you’re going to try to cut off his funding. That’s why it’s really hard in a big, established organisation, to do new things. But not impossible.

Next time we’ll discuss how to incentivise Intrapreneurs.